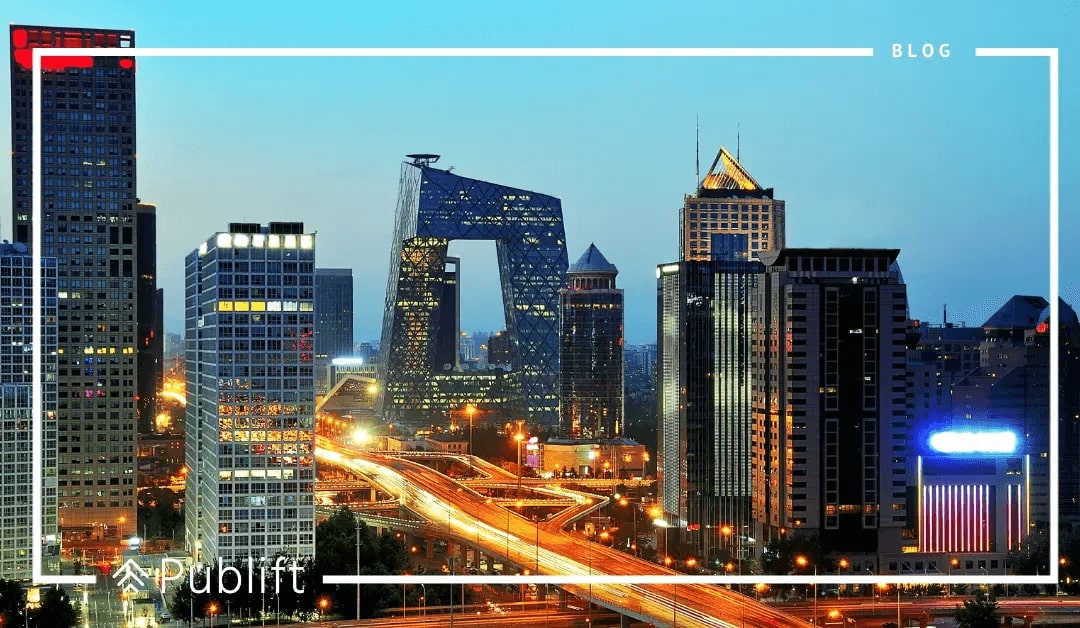 It’s impossible to deny the allure and mystery of China. Publift CEO, Colm Dolan shares his thoughts from a recent trip to the land of the Red Dragon with our Platform Lead, Brock Munro.

Brock and I were absolutely gobsmacked by the sheer wealth and prosperity in Beijing in spending the last week on a reconnaissance trip to look at how we can do business in the largest internet market in the world – and what we can learn. In two days we must have seen over 50 Tesla’s; no wonder Elon Musk was dancing in Shanghai!!

Allen Bias, VP Strategic Partnerships of Webeye describes the market as being “HOT” right now. Webeye publish & distribute gaming apps. Their business model initially focused on the lucrative overseas market, but over the last couple of years, their focus has changed to the “HOT” Chinese market. The latest stats from the US about people spending four hours online each day shocked me, in China, it has to be at least eight! People are glued to their phone – in coffee shops people are glued to the phone instead of talking.

With this incredible wealth in the local market – how does one capitalise on it?

The market is similar to the west. There are three dominant players – Tencent (WeChat), Bytedance (TikTok) and Alibaba, similar to Google, Facebook and Amazon. To unlock any doors you need to buy traffic from these guys and mainly distribute through the same channels.

From an app-specific point of view, each manufacturer (e.g Huawei) has their own OS where apps are distributed. There is no Google Play store in China and 70% of the Chinese market use android devices.

Hyper-casual gaming and H5 are also very popular in China right now. Many of these apps have a really short shelf life – sometimes only a few days. All revenue seems to come from ads (Tencent, Ali & TikTok) with little in-app purchase.

There is lots of opportunity to capitalise on, but you need a gaming publisher license and copyright documentation. Partnering with a reputable local player is crucial.

There is definitely an undercurrent of people wanting to make quick cash in the app game. The gaming app business is thriving but with the quest to keep up the rest of society there are some “dodgy” business practises.

In particular, traffic acquisition in the west by these developers is a grey area. I’m sure its a battle for Google/Facebook policy teams to keep these developers in line. But surely there needs to be some scrutiny on the ethics of some app’s business mode especially when they are buying in such large traffic volumes.

The way WeChat, in particular, has influenced daily life is incredible – its the main business and personal communication tool. People’s sense of identity seems to be through the WeChat lens.

TikTok is already tapping into the business community by offering “OKR’s” (Google’s employee rating system) in their app interface. Business seems to rarely take place on a computer. It’s already dwarfing the influence of the west tech giant’s. One can operate on daily basis without Google, Facebook and Amazon. One cannot operate without Tencent, TikTok and Alibaba.

In the past we’ve seen the future through an American lens. Now, it’s very much China. WeChat (Tencent), TikTok and Alibabi are in a much better space than Facebook, Google and Amazon in the race to be the dominant players globally. Users want the best products and it looks like these guys have got much better integration in daily life. You literally can’t operate without them.

I’m sure that the Chinese big three are working on enhanced AI capability. We’ll be conducting all aspects of business and personal life through enhanced AI on a phone in the very near future.

Appendix From arrival, it’s apparent that one needs to adapt to how life operates in the east. WeChat is a must to connect to do any business meetings – a pre-loaded VPN for access to any Google/Facebook options. There is little or no cash – its all WeChat or Alipay.  Finding an ATM is a mission and then there is the lottery of whether it will work or not. Unfortunately, you need a Chinese domestic bank account to set up the payment methods. The welcoming and warmth received from each meeting was superlative.  Each meeting was 2 hours long with lunch or dinner afterwards in the finest dining restaurants in Beijing all paid for by our hosts. Brock really enjoyed the chicken feet (I’ll leave it at that). Our hosts booked taxies, gave us recommendations on touristy things to do and followed up later that day to see how we were getting on – and these were all prospective clients! I hope we can replicate this generosity in trips to Sydney.