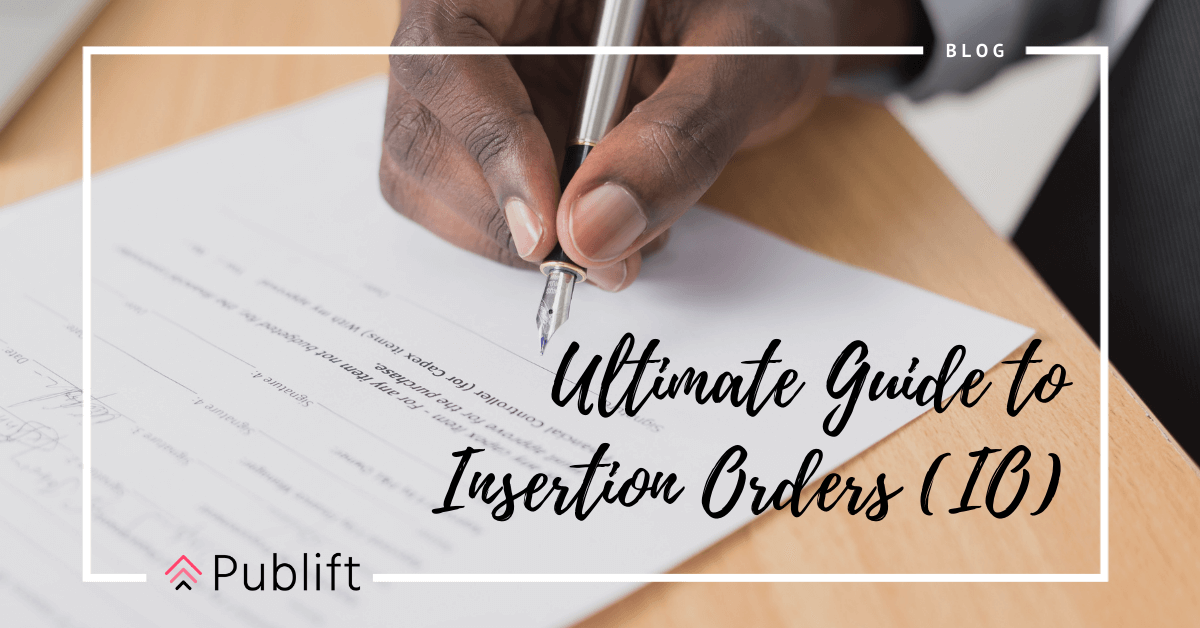 The world is run by paperwork. There is always a form to fill out for even the simplest things. The online advertising world is no different. The modern ad industry is coming up with innovative ways to keep records for agreements and business transactions. This is where insertion orders come in.

What is an Insertion Order (IO)?

An insertion order in online advertising is the contract (or template) that provides the specifics of an advertising deal between an advertiser and a publisher. It is the final step in an ad proposal process, which when confirmed and signed, seals a commitment from an agency, brand, or company to run an advertising campaign on the publisher’s website(s).

As far as what an insertion order looks like, an IO should contain all the necessary information related to the given agreement between the advertiser and the publisher. However, there is no universal format or uniform documentation since each agreement may differ. To get an idea of what one looks like, here is a sample below:

An insertion order is essentially a form of assurance. The parameters of an advertiser’s campaign with a publisher can be set and agreed upon in advance. Right before the campaign goes live, the budgets, start and end dates, even impressions served can be decided. Both parties know what they are getting exactly before it begins. This way, the publisher can rely on the ad revenue to manage their cash flow, and even leverage that to attract more advertisers.

More than anything, an insertion order provides the opportunity for publishers and advertisers to work together. Unlike an automated process, insertion orders ensure both parties go over specific terms and parameters to effectively agree on their goals.

What Are the Benefits of an Insertion Order?

Some of the benefits that an insertion order offers include:

A typical IO should contain every detail involved in an advertising proposal for the publisher and advertiser to know what exactly they are getting.

2. The agreement is customizable

Since IOs allows both parties to work together, the agreement is customizable at great length to make the deal beneficial to both parties. Publishers can modify the kind of ads they run as long as the advertiser understands every detail.

The IO serves as the proof of deal for the publisher. The order specifies the amount paid to the publisher for the advertisement.

Publishers lose $1.27 billion yearly to ad fraud according to a new study by 16 leading programmatic publishers across 26 domains. Deals involving insertion orders greatly reduce fraud risks because advertisers (or agencies) and publishers sit together to bring about a sense of security.

What Are the Downsides of an IO?

While there are benefits to using insertion orders, there can be some potential downsides as well. Many publishers are opting for programmatic advertising instead because of the tedious and long wait times involved when dealing with insertion orders. The programmatic advertising environment involves valuable tools such as artificial intelligence that replace regular human tasks, real-time bidding for on-demand ad placements, and massively improved reporting opportunities. Some downsides of using insertion orders are:

The preparation and processing of an IO requires intervention from human resources. A person prepares it, another approves it, even before the advertiser and publisher come together to discuss specifics about the deal. Each added step can slow down the whole process.

2. Demand for IOs is shrinking

IO agreements are old school. There is a new, trendy and automated method in programmatic advertising. Programmatic advertising is currently at the center of digital display ad buy as it involves a data-driven process that places ads based on end-user information and demographic with live availability updates.  Both publishers and advertisers find automated means advantageous, as they are easy and lightning-fast - this is limiting the demand for IOs.

3. Negotiations can be tricky

For an insertion order to be in motion, there has to be an agreement. In a perfect world, agreements are possible, but not always. Advertisers and publishers might bring different expectations to the table, leading to lengthy negotiations at a high cost. This way, the agreement might not happen.

How to Prepare an IO

There are different insertion Order templates online, including free and paid options. However, Google and Bing offer easy ways to create insertion orders quickly. There are some common elements which are expected to be presented in an insertion order such as:

A self-explanatory part of the IO process. It is split into two parts, where the first part includes the advertiser’s contact information stating the name, address, website, phone, email, and date. The second type consists of the billing contact, i.e. who deals with payment or an accounting issue.‍

This part contains creative elements of each campaign, and it includes details such as the ad size, dimension, format, and other important specifications.

Here, an advertiser provides information about the campaign. The start date, end date, page to run the ads on the publisher’s site, a number of impressions, geo-targeting, target audience, budget, and similar details. The IO serves as the comprehensive agreement between the publisher and the advertiser. As such, every modification to the deal has to be put into writing and signed.

Insertion orders should be straightforward. However, any confusion that may come up must be cleared before the IO is signed and the ad campaign started.

Since an insertion order is documented proof of an ad proposal, before signing, both the publisher and advertiser need to go over every detail thoroughly to avoid future disagreements.

Publishers also need to have realistic expectations and understanding of their inventory. For example, publishers shouldn’t oversell by displaying more impressions than they normally receive. Instead of going with fixed amounts, it is best to specify clear ranges based on past data.

While IOs can sound like a stressful, extra step in an advertising campaign, it still has numerous benefits. For a publisher, it can be useful for auditing purposes, and is a helpful way to run a well-monitored, successful campaign. For advertisers, it can be a great way to manage ad spend and budget through a publisher's platform.

Everything to Know About Bot Traffic

What Are Vast Tags and How to Create Them?