When Will Google Transition to a First Price Auction? 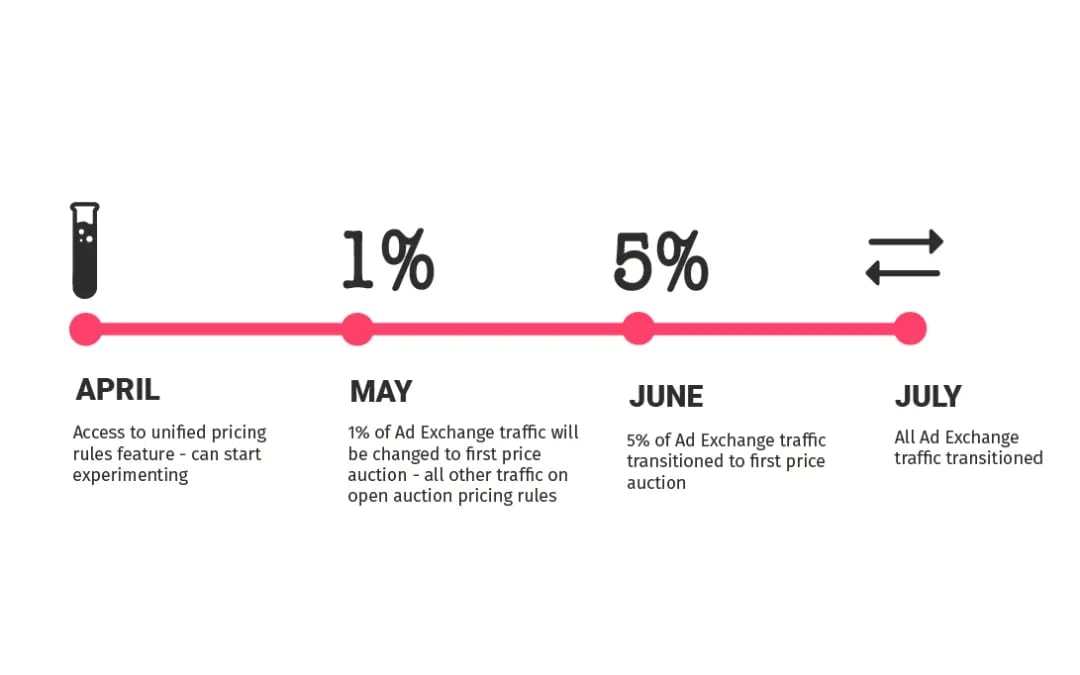 Google’s Ad exchange is making the switch to first price auctions and joining the rest of the programmatic world. This will have some significant consequences for publishers as it is rolled out this year.

But when will this all come into effect for you?

Well, Google has released a tentative schedule for their transition to first price auctions for Google Ad Manager so you know how and when this will happen.

In the coming months, your inventory will gradually transition from a second price auction to a first price auction with Google. Open auction pricing rules are set to be replaced with simplified unified pricing rules. This change to a simplification in rules has been met with hostility from bigger publishers like the New York Times in recent weeks, with ongoing negotiations into the topic between major publishers and Google getting heated at times.

Why Are Larger Publishers Unhappy?

The controversial points are around the simplification of floor prices. Publishers often set different floor prices for AdWords for example. This might be due to ad quality concerns or bidding tactics. Under the new rules, setting different floor prices per buyer is not possible. This change could theoretically mean Google will now pay less for what they buy which will mean publishers lose out on revenue. This may, however, lead to more impressions being bought as Google may have been left out before.

What is Google’s Response

Google has responded by saying that the changes are inevitable for the digital ad ecosystem that has already mostly made the shift to first price auctions and that in the long term it will help publishers increase yields and get more bid data.

Google will now make sharing of bid data mandatory among buyers on the platform. Previously buyers had to opt-in to have their bid data shared with publishers. All auction data for a single impression will now be shared with the publisher, giving them better visibility across each auction to help them build better strategies.

When will Unified Pricing rules apply?

Unified pricing rules will apply to all traffic across Ad Exchange, Exchange Bidding, and any non guaranteed line items you may have. All other traffic will remain under Open Auction rules. If there is any overlap between the two, the higher floor price will apply.

“THIS CHANGE TO A SIMPLIFICATION IN RULES HAS BEEN MET WITH HOSTILITY FROM BIGGER PUBLISHERS LIKE THE NEW YORK TIMES IN RECENT WEEKS.”

So When is it all Rolling Out

Starting in late April, any publishers using Ad Manager will have access to the new unified pricing rules feature and are encouraged to begin creating new rules to experiment with setting floor prices.

In late May, 1% of your Ad Exchange traffic will be changed to a first price auction where the final price paid is determined by the highest net bid in the auction. The simplified unified pricing rules will apply to these bids submitted in the first price auction, with all other traffic still under the open auction pricing rules.

By June, 5% of your Ad Exchange traffic will be transitioned to the new auction described above where the winning bid determines the closing price. This slow transition is to help mitigate large volatility that could arise from a sudden change to new pricing rules. Google is allowing publishers and buyers to adjust to the new rules and figure out their pricing and buying strategies moving forward on a small percentage of their traffic before the full transition is made.

By late July all traffic on Ad Exchange will have been transitioned to the new auction with only unified pricing rules applying from then on.

An area publishers will want to take a look at is their floor pricing strategies. Often times programmatic auctions don’t have enough competition to drive up the bids and so publishers have implemented complex floor pricing strategies to make sure they aren’t selling premium impressions for pennies. Sam Cox, Google’s Product Manager at Google Ad Manager says “publishers will need to rethink their floor pricing strategies as buying will become far more simplified.” This is part of the reason the role out of this implementation will be over the course of the year to allow everyone to test and adapt gradually. This is where major publishers believe they are losing out on the control they once had over the price of their inventory.