What Will Google’s First Price Auction Mean For Publishers 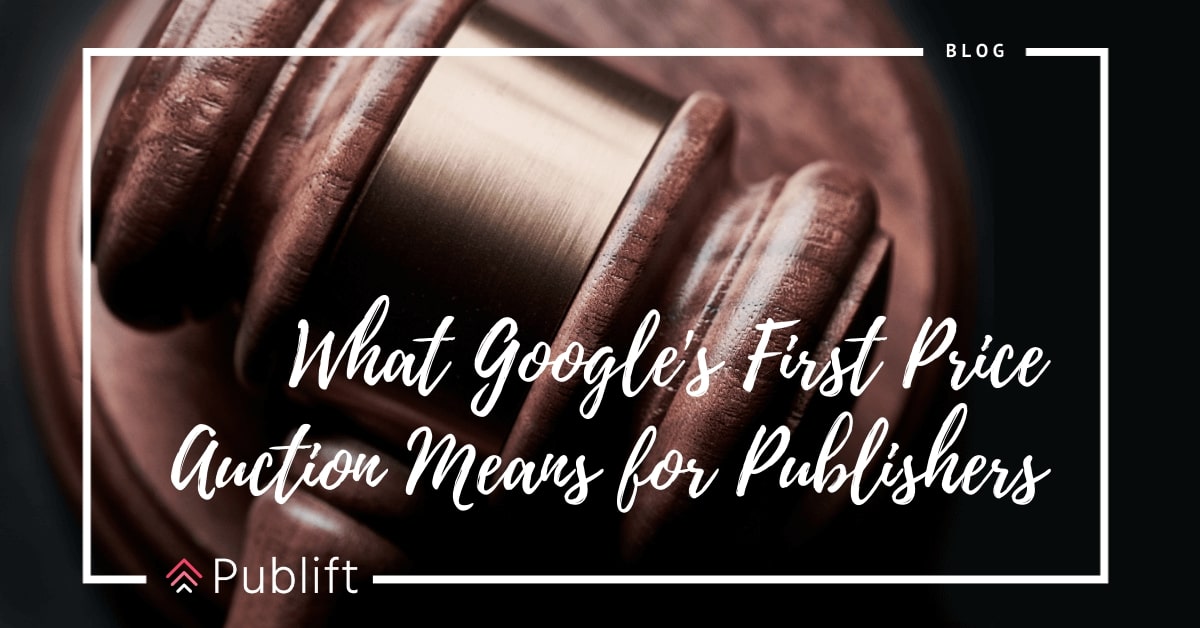 But with publishers, buyers and technology becoming increasingly more sophisticated and complex, this led to less transparency in the industry and a lot of second bid optimisation tactics. It has increasingly become more difficult for advertisers and agencies to properly value programmatic inventory.

By switching to a first price auction, Google is helping to reduce this complexity and creating a fairer and more transparent market for everyone. With this change, all prices from buyers will compete in a single unified auction and the buyer that wins the auction will pay the price they bid.

So, let’s break down Google’s decision and look at why they may have made the switch and how it will affect you as a publisher.

What is a First Priced Auction?

The move towards header bidding by Google’s competitors and many publishers brought with it the introduction of first price auctions from the likes of Rubicon, Index and Pubmatic. By allowing these exchanges to compete on a first price auction while they still used a second price auction, Google was losing out on impressions they may have held the highest bid for.

Lets Break This Down

In some cases, advertisers could end up competing against themselves bidding for the same impression, through different exchanges with different auction rules. They could’ve been the first and second price bid. All adding to the complexity and opaque nature of programmatic buying.

How Will This Affect Publishers Using Header Bidding?

Header bidding has been hugely successful in increasing the competition publishers have for their inventory and driving up the revenue they receive. A recent analysis of our entire customer base has shown that we see on average, a 54% net increase in revenue for publishers after 6 months of moving to the fuse platform which uses header bidding.

This change from Google to a first price auction will help Google to win more impressions against other exchanges, but this shouldn’t decrease publishers revenue. Not every advertiser/agency uses Google. And even those that do, still put some premium spend through the other partners like Rubicon, Index, Pubmatic. So you are still adding more competition for each impression which will drive up CPMs and publisher revenue.

So in summary, publishers will probably see more revenue from Google. Overall publisher revenue should increase while buyers adjust their bidding strategies.

Buyers have already been dealing with the move towards first priced auctions over the last year and have incorporated a number of technologies and algorithms further adding to the murkiness of the industry.

One such technique adopted was bid shading which was implemented as a compromise between first and second priced auctions. Bid history information is analysed per site or ad position to find what bids normally win and what price is normally paid for impressions.

A number between these figures is chosen as the bid in order to maximise the chances of winning the impression whilst minimising the risk of paying far above what’s needed. It helped to soften the blow of moving to first priced auctions where buyers were paying far above what they had before.

After an expected bump in CPMs and volatility after the initial rollout, we expect buyers to adjust their bids closer to what they are actually willing to pay for impressions – instead of bidding to win an auction and hoping to pay slightly less at the end. To help advertisers make the transition without overpaying by too much, Google’s exchange will provide an option for advertisers to allow Google to lower their first-price bids. However, Google will remove this optional bid translation service in 2020, according to Digiday.

When Will This Take Place?

Google is going to roll this out gradually over the next few months and hopes to have the roll-out fully completed before Q4 2019. This is to help minimise any volatility in pricing on both the buyer and publisher side and allow everyone the chance to adapt. In the coming weeks, they plan to introduce new features to selected publishers to manage pricing conveniently in the unified first price auction.

This move to first priced auctions for display and video advertising will not have any effect on auctions for ads on Google Search,  AdSense for Search, YouTube, and other Google properties

“Google has been passing second price bids into a first price auction. This makes them less competitive. We’ve seen first hand their share of revenue and impressions have dropped in the last 12 months (with growth from header bidding and Exchange Bidding partners). Moving to a first price auction will allow them to compete with other exchanges evenly. So I’d expect Google to gain back some of those impressions and revenue they lost recently – pushing up a publisher’s overall earnings. The change will also simplify Google’s auction process to one unified auction in Ad Manager.”

Brock Munro Publift’s Platform Lead, on how it will affect the publisher.

“Initially, after the first price auctions go live, there will be a lot of volatility in prices for Google bid ranges. Buyers may initially adopt a bid strategy of higher bids which could mean an uptick in revenue for publishers but this will quickly taper out as buyers become more sophisticated.”

“Publishers can look forward to a learning period by advertisers coming through adx, which may lead to an uptick in overall revenue. Buyers in second priced auctions today bid the highest price for an impression with the lowest risk of overpaying. Eventually, bidding strategy will catch up with the auction change and I would expect similar transaction patterns through Google’s advertisers. What will be interesting is how quickly buyers adjust and what strategy they’ll take in this new auction.

The 11 Best Ezoic Alternatives for Publishers in 2023